Wordmills and Baboons had two outings in March.

There was a piece in the group show at Lot 19 which was part of the Castlemaine State Festival.  The brief was to use the wire frame provided (tent shaped) and make an art work that responded to the theme ‘Before and Beyond’.

The piece was title ‘Fifty Shades of Jane Eyre’

The outside had some lovely generic pages from romance novels, including Jane Eyre and Fifty Shades of Grey.  If you cared to crawl inside the tent you would have seen from the same books, but with passages, sentences, or words highlighted.  These selected words were examples of how in these novels the man is given all of the power and the woman is described as weak, unstable and as prey.

There were also two workshops run as part of the Fringe Festival. Participants were encouraged to cut and paste words into books, or photocopies of books, and to reverse the gender.  Some people rebelled against this rebellion and chose to create versions of their chosen text where everyone was the same gender.  Go Team. 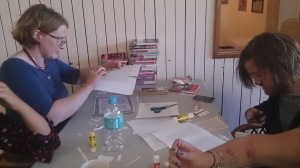 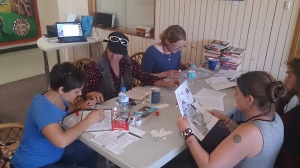 Its been a long time since I've posted any art... And these aren't even new. I found this little collection of palm sized drawings in a pile of paper in my studio. Not sure when I did them, but I'd guess about seven years ago. . . . #drawing #art #abstract #surreal #streamofconsciousness #noplan #justseewhatcomesoutonthepage #penandink
Working dog pt 2 @bobbiandthecats . . . #workingdog #hardwork #rescuedog
Early morning meeting. @bobbiandthecats . . . #workingdog #climateactivist #rescuedog #dogslife #dog
Yay! Ring the bells! Celebrate! . . Selected designs of mine are now available on Red Bubble! Just in time to get your grandma a hoodie with this dude on it. Or maybe just a sticker... Like this. . . Go to https://alisonhanly.info/shop . . . #merch #christmasissorted #redbubble #shop #moneyforartists #buybuybuy
Remember my 2014 show 'Wordmills and Baboons'? I've been cleaning out the studio and came across a whole crate full of source material! I didn't feel bad recycling them. They had all been cut up and turned into collage for the show... And anyway, you can always get more for 50c at the op shop. . . https://alisonhanly.info/visual-art/wordmills-and-baboons/ . . #romanceisrecycled #romance #recycle #artdetritis #theartisticprocess #art #creativeprocess #cathartic #clearout #moveon
So meta! Me, taking a photo of a photographer photographing my uncle standing next to the artist who did the portrait of him that hangs on the wall beind them. . . #someta #photography #portrait #trinitycollege #melbourneuniversity #art #oilpainting #nicholashardingart
Still slowly moving in to the studio @lot19artspace . . Very happy with my curtains. They will hide my personal art practice mess when I run workshops ect . . Also happy with my growing collection of plants to break up that industrial chic view of corrigated iron. . . And the new cafe is open so we had lunch and saw the new show in the gallery and found out one of the artists is my studio neighbour and very lovely to boot!!! Holy frik... How lucky I am. . . #art #studio #curtains #lot19artspace #castlemaine #potplants #artist #gallery #dog
I got me a new studio!!! . . Very excited to be moving in to @lot19artspace . . Had my first cup of tea, moved the first few things. I'll be able to make art and run workshops and do all sorts of cool things. Can't fikkin wait!
It's down. Not quite out. Thanks for coming along. Til next time....
%d bloggers like this: